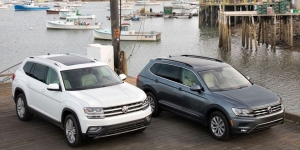 If you were in the market within the last few years for a crossover compact SUV chances are you are aware of, and possibly considered, the Volkswagen Tiguan.  If you wanted a larger SUV perhaps you considered the Tiguan’s bigger brother, the Volkswagen Atlas.  Many consumers have purchased these vehicles and found them to meet their needs.  That is, unfortunately, not to say that all have been happy or satisfied with the purchase.

Consumer Reports is a well respected publication that spends significant resources evaluating the automotive industry in efforts to provide consumers objective reviews for information purposes when car shopping.  While the Tiguan and Atlas have received positive reviews with respect to styling, features, and performance, Consumer Reports scores for these vehicles with respect to their reliability and predicted reliability is quite low.  In large part based on the reliability concerns the trusted review publication gave each SUV a mere 61/100 for the 2020 Model Year.  In fact, this score landed the Atlas at number 19 out of 23 SUV’s tested by Consumer Reports.

Engine and transmission concerns were the primary culprits for such low scores.  Both the Tiguan and Atlas received 1 out of 5 in predicted reliability scores.  Owners of past model year Tiguans have complained of transmission issues and defective power equipment.  Consumer Reports has seen no indication that such issues have been addressed and will change.  With respect to the Atlas, the vehicle also received its 1 out of 5 predicted reliability score based on the fact that it is related to the Tiguan but also because having only been released in 2018 there is simply not enough data yet to establish a higher rating.

While Volkswagen would like to argue that consumers are generally happy with these vehicles – and many certainly are – there are enough complaints from owners to have both vehicles land on Consumer Reports 10 least reliable vehicle lists in 2019.  The Volkswagen Tiguan landed at number 6 on the list; with the Atlas one spot higher at number 5.  In addition to the engine and transmission concerns referred to above, the list indicates that owners report problems with power equipment, in-car electronics, suspension, climate systems, and fuel/emission systems in these vehicles.

With every day these vehicles get closer to the end of their warranty periods and if someone finds himself/herself as the owner of one of these vehicles with such problems remaining unfixed that owner has rather costly repair expenses to unfortunately look forward to.

If you’re a Californian and you own one of these vehicles and have taken it in several times to the dealer for warranty repairs for issues that seemingly can’t be resolved the Law Offices of Michael Devlin may be able to help you.  The Law Offices of Michael Devlin works to assist California consumers under California’s Lemon Law.  Under California’s Lemon Law, if you have a case we can assist you at no cost to you as the Law indicates that the manufacturer shall pay your attorney on your behalf!